The Best Dog Ever-
My Amazing Friend

The best dog ever, is my amazing Papillon dog  Chipp. I grew up with dogs in our household,(our dogs were protectors,watch dogs as they were so called). But I cannot recall the  dog breed.They were more connected to my dad,(his dogs).

Prior to owning my dog, I was lonely at times,(even though I was not alone). I  was   always residing in apartments where "no pets allowed"

The thought of owning a dog was far back in my mind, (i always dismiss it).  So. I enjoyed being with people most of the time. Indulging  in conversation, feeling that I belong,(experiencing the warmth of human relationship).

However,for myself, (a unique individual who loves to do the unusual things), unusual in people's eyes. I needed more  than just a friend.I needed to be engaged in mini adventure at the most unlikely time of day without feeling restricted,(a dog is just the right companion), to get away alone.

Having a dog in my life, helped me embrace life more joyfully),and I become a dedicated dog lover., which led me to the best dog ever.

The Amazing Traveler-The Best Dog Ever

As mentioned, having a dog works wonders for  me.  As you  have read,i take risk that most woman would  take,(without  a company).  Another experience I enjoy--- I love to sit on a beach watching the sunset  with no-one else, (except the best dog ever)

I would also just sit on a boulder watching the waves  without thinking about my challenges,(that's an escape in itself).  Life can be  brutal at times and it's  great to get away from it all  (not feeling  alone,or rushed).

Having a dog with me, is a perfect companion  for such a awesome adventure, (without being reminded that it's getting late, or we should  go now), which  again led to the best dog ever.

Chipp, enjoys sitting quietly in my lap  participating in whatever i do. Sometimes i get the  feeling that he hates to leave, whenever I'm ready to go..He is the best dog ever.

So Chipp, enjoys the atmosphere  outdoor, regardless of where it takes me,(rain,snow,or a sunny days). Most of the  time I do not take him in a dog carrier, (just in my pocket book which he would get in himself)whenever he see me dressed to go somewhere. He is only a 4 pounds Papillon, However, he acts like a full grown Doberman Pinscher.

He is a champion in my eyes. He is bold and  very much aware of his surroundings. And  he  lets me know when there are  changes around me. He is very protective of me, (the best dog ever). I love to travel with my dog.

The Best Dog Ever is Any  Breed That Brings You Comfort

Regardless of the breed or the size of the dog. Dogs can make a better person out of you, (if you are willing). I have a tendency to be  serious in my countenance at times.  And i became more aware of it, from Chipp's behavior.

When i realize what was causing this behavior, i began to fix my expression,(and he was happy and lick my face). Chipp help me to become a more pleasant individual,(the best dog ever,my chipp).

I never reached  out to strangers  before

I'm not one of those people who quickly reach out to strangers.Chipp help to bring the most unlikely people into my life.

I have met hundreds of people of different class and background(male and female),whom i have  ended up having great conversation with, (not just talking about dogs). The best dog ever,my chipp

My dog   is a gift to myself,but also to other folks who are reserve to make contact with other human beings.

Chipp break the ice always. He seem to know when a human being needed comfort, (even if the human being is a stranger).  I can never quite  fathom  it,(but there are times when Chipp literally pulls away from some people).

And there are a times,he eagerly  push forward to meet others. He seemed to give people joy, a kiss to say "I understand" you will be alright,(or even seem to say you are not sincere),do not touch me. 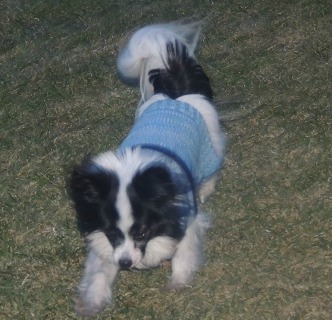 Chipp  came into my life 12 years ago,as mentioned,when i was living in an apartment  where "no pets allowed" But i decided to break the rules because  i couldn't  stand being lonely anymore.

I desperately wanted the attention and the companionship of a non-human friend who would love me unconditionally).

I would  take long walks in the parks by myself, since (everyone were busy with their own lives).

So i  started my quest to search  for the best dog ever, (for my mental and physical health. I visited  shelters in and out of my state. I contacted shelters  and  breeders online.  I read  many books about different breed of dogs.

Then finally,i decided on the personality and the type of dog most fitting to my personality,and my lifestyle,the best dog ever for me.

A Papillon was a  great match).  I  decided on a breeder  in Pennsylvania,(at least, the breeder decided on me). I made a down payment  even before Chipp's mom was impregnated.

Six weeks after Chipp was born. I took him home,and  i was truly his mother. Whenever we went to the park, (he would walk behind me wherever i go like little attached ducklings), It seems like everyone in the park was fascinated by him.

Chipp stayed  close to me at all times.   If i was lying in bed,he would   cuddle up close to me. He  wanted to sit behind my back whenever I am sitting at my desk. He would never sit on the floor by himself,(the best dog ever, my chipp). 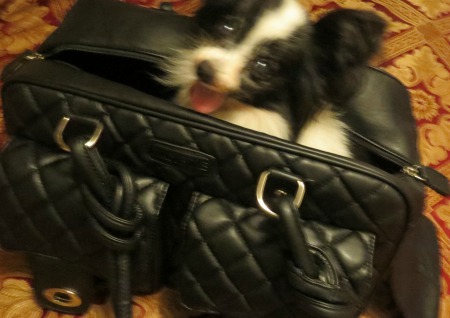 My Inspiration-The Best Dog Ever

I took my dog Chipp everywhere,(i got chased out of a place once), when a nosey person discovered my dog  in my bag,(and reported it).   Chipp goes to work too,(and sleep all day in a carrier under the desk),and noone was ever aware a dog was with me.

I was naive when i  first took him to work though.  As a result of a conversation,(i informed people of Chipp existence), they were shock. I then introduced him to my  patients,(who loved him, and played with him during my work day.

However, it was much better when Chipp slept all day, (because he become overstimulated and tired with friends). When he misses me, he would whine, (cry like a baby),in which case, (they would bring him into the office). And i would apologize all day.

Looking back, I would never have done that today. But he is the best dog ever. Having Chipp,is awesome .Everyone wanted to take him home,or care for him for me,(but i wouldn't agree to that).

As Chipp grew older, i started taking him to daycare,(and i was fortunate  for the one that i selected,(because the owner allowed  me access  to pick him up anytime day or night),even after the day care was closed).

One night after 1 am, (after work, a police patrol caught me opening the daycare),which is a storefront location  to collect my dog. The policeman called the owner of the shop, while i  stood there waiting. It was indeed a privilege to have such access.

People everywhere, enjoys the companionship of dogs. I have discovered what even when my own dog is not around,(people's dog) embrace me. Which is shocking to some people,because some of these dogs are standoffish to strangers,(a dog sense the gift of the best dog ever).